In July of 2011 Sergeant Dodson checked into MCAGCC, 29 palms, CA and reported into 1st BN 7th Mar. While in 1/7 he went to Animal Co and conducted a workup for deployment focused on training, living with and partnering with the Afghan National Army and Afghan National Police. Sergeant Dodson deployed to Sangin, Afghanistan in March 2012 and throughout the duration of deployment was living with and patrolling with ANA and ANP. 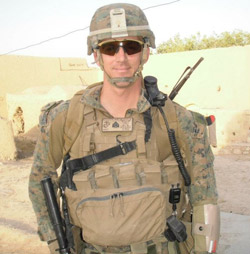 On August 5, 2014 Spc. Hoover was performing a PSD operation for USACE, when the group that he was assigned to came under attack from an unknown assailant. Spc. Hoover, received wounds immediately when the firefight started, but was able to get to a position where he could protect people behind him. Spc. Hoover fired back with his M4 rifle and when that jammed his 9mm pistol.

Sgt. Hoover since the attack has gotten engaged to his longtime Girl Friend Kristy Guzman, who moved out from Ca after the attack to take care of him. Sgt. Hoover has numerous personal awards which include but are not limited to the Bronze Star, Meritorious Service Medal and the Purple Heart. 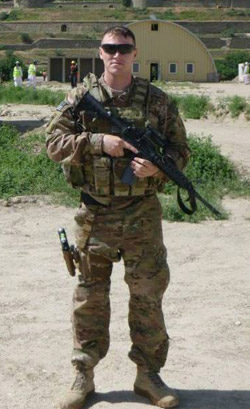 Petty Officer Brandon Maddox enlisted in the Coast Guard in May 2004 and spent time patrolling the seas in South America to intercept illegal narcotics vessels, numerous deployments for National Special Security Events, including Presidential security and evacuation missions and a deployment to CENTCOM.

Petty Officer Brandon Maddox was injured Dec. 21, 2014, after the helicopter he was flying in crashed into the ground before landing and rolling over 3 times, coming to a rest upside down and on fire. The result was numerous broken bones throughout his body, shrapnel in his foot, broken teeth, and an extensive shoulder injury, which resulted in surgery. Despite his own severe injuries, and after egressing the downed aircraft, he realized the other 5 crewmembers were still in the burning helicopter. Brandon immediately returned to the wreckage to attempt to extract the crewmembers and extinguish the fire.

Brandon’s injuries were treated in Kuwait and Bahrain. When sufficiently stabilized for travel, he was flown back to the States, where he received further treatment and rehabilitation. During his rehabilitation, Brandon far exceeded doctor’s expectations, returning to full duty status just 4 months after surgery.

Since returning from deployment, Brandon has applied for the Special Agent position within the Coast Guard Investigative Service and was selected with only 3 other people to begin a 5-month academy at the Federal Law Enforcement Training Center in Glynco, GA. 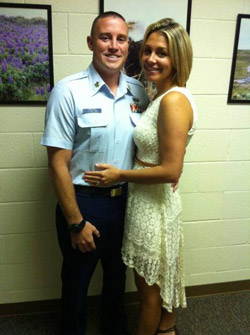 Major Rettig, an Active Duty Emergency Physician, was commissioned as a 2nd Lieutenant in March of 2004.  She attended University of Indianapolis Medical School, through the Air Force Health Professions Scholarship Program, from 2004 to 2008. After graduating from Medical School, she completed a Civilian Residency in Emergency Medicine and began her Active Duty career at the 96th Medical Group, Eglin AFB, FL from 2011 to 2015.

She deployed in 2012 with the 651st Expeditionary Aeromedical Evacuation Squadron, Kandahar, Afghanistan; and 2013-2014 with the 455th Expeditionary Aeromedical Evacuation Squadron, Bagram, Afghanistan. She distinguished herself, by meritorious service during 160 combat hours of sustained flight as Critical Care Air Transport Team Physician. During her two tours, she was awarded the Air Force Commendation Medal and Aerial Achievement Medal, with three Oak Leaf Clusters, for her role in transporting 72 critically ill and wounded service members on 46 combat missions. She delivered these warriors, to a higher echelon of care, with 100% survivability, and played a pivotal role in bringing them home to their families.

Major Rettig cites these deployments as the epitome of why she decided to enter into a career in Medicine. She believes that there is nothing greater in life, than serving our Nation’s finest, and hopes that they can do their jobs better, knowing that those in the Critical Care Air Transport Community will do whatever it takes to get them home when they are injured.

Major Rettig finished her Active Duty Service commitment this past summer. She signed up for another four years, with the Air Force sponsoring her next two years of Advanced Fellowship Training in Critical Care, back in Indianapolis, where she resides with her dog, Jaxson.  After Fellowship, she hopes to work as cadre for the Critical Care Air Transport Team course at the University of Cincinnati Medical Center. She hopes to teach her future Critical Care Air Transport students the techniques she learned in Afghanistan, and to continue to deploy in support of those who lay their lives on the line for our Nation’s safety and Freedom. 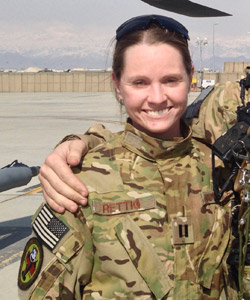 Navy Senior Chief Douglas (Doug) Thompson, Jr enlisted in the Navy Reserve in October 1996. In May 1999, accepted orders to Active Reserve orders to Landing Support Battalion out of Youngstown, OH as the Active Duty Corpsman. Recently retired, 28 January 2015, from Communications Company in Cincinnati.

Thompson was injured Jun. 26, 2011, after the vehicle he was riding in hit improvised explosive device (IED) returning from an inspection of a road project. The IED caused the vehicle three times. He was medevac’d to the forward surgical team on the forward operating base. He showed signs of a TBI, and convinced the physicians he could stay and train the replacements. Upon returning home received medical care at Wright Patterson Air Force Base, where he was diagnosis of Traumatic Brain Injury, PTSD, Cervical Neck spur, loss of use of left leg below the knee. Currently still being managed by Wright Patterson, and is slated to have medication pump placed in his lower back.

Thompson, 48 years old, resides in Dayton, OH, with his wife of 26 Years, Jenny, and 14-year-old daughter Kaylee and has two sons, Lance, 25, who works as an RN at Grandview hospital in Dayton, and Cory, 24, who is finishing his BA in graphic arts design. He is currently unemployed, has a BS in Health Care Administration, and working on his Master’s Degree in Public Health, finishing June of 16. 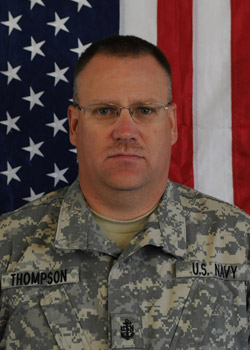