Prior to joining VA, Mr. Gibson served as President and Chief Executive Officer of the United Services Organizations (USO), which has been lifting the spirits of American Servicemembers and their families for more than 73 years. During his five years at the USO, net fundraising grew 90 percent, enabling dramatic growth in programs and facilities supporting our forward-deployed men and women, military families, as well as our wounded, ill, and injured Servicemembers, their families, and the families of the fallen.

Before joining the USO, Mr. Gibson spent more than 20 years in banking in Charlotte, NC; Atlanta, GA; Nashville, TN; and Birmingham, AL. In 2004, he retired from AmSouth Bancorporation, a New York Stock Exchange–traded corporation, where he served as vice chairman and chief financial officer. During his tenure as CFO, AmSouth was added to the S&P 500. Mr. Gibson also has a long history of service and leadership with a variety of nonprofit organizations. In 2002, Mr. Gibson chaired the United Way campaign in Central Alabama, which raised more than $30 million.

Mr. Gibson is the son of an Army Air Corpsman who served as a B-17 tail-gunner during World War II, later earning his commission in the U.S. Air Force. He is also the grandson of a World War I Army Infantryman who was wounded while serving in the 3rd Infantry Division at the Second Battle of the Marne.

A 1975 graduate of the United States Military Academy at West Point, Mr. Gibson earned both Airborne and Ranger qualifications and served as an infantry officer in the U.S. Army. He earned a Masters in Economics from the University of Missouri in Kansas City and a Masters in Public Administration from the John F. Kennedy School of Government at Harvard University.

Deputy Secretary Gibson and his wife, Margaret, have been married nearly 32 years. They have two grown daughters, Celia and Laura. 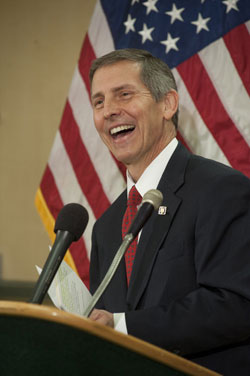 Colonel Gregory D. Gadson, a Chesapeake, Va., native; has served our nation in the United States Army for more than 26 years.

Col. Gadson’s service culminated as the Garrison Commander of Fort Belvoir, where he oversaw the daily operations of the post, a strategic sustaining base where more than 50,000 military personnel and employees provide logistical, intelligence, medical and administrative support, and command and control for a mix of more than 140 commands and agencies for the Department of Defense.

A 25-year career Army officer, Col. Gadson’s life is a portrait of courage in the face of great adversity. In May 2007, as commander of the 2nd Battalion, 32nd Field Artillery, Col. Gadson’s greatest challenge came in Iraq, where an Improvised Explosive Device (IED) attack cost him both legs above the knees and normal use of his right arm and hand. Despite this, Gadson remained on active duty in the Army and continued to inspire many with his message of courage, perseverance, determination and teamwork. Refusing to be defined by the proverbial “hail of bullets,” he has since drawn upon the lessons of Pride, Poise and Team, learned as a West Point linebacker, and applied them to his life, career and family.

He was commissioned as a 2nd lieutenant of Field Artillery in 1989 from West Point. He has served in every major conflict of the past two decades, including Operations Desert Shield/Storm in Kuwait; Operation Joint Forge in Bosnia-Herzegovina; Operation Enduring Freedom in Afghanistan and Operation Iraqi Freedom. Greg has served in various assignments throughout the world. He has dedicated himself to leading the Soldiers, civilian employees and family members in living the Army Values of Loyalty, Duty, Respect, Selfless Service, Honor, Integrity and Personal Courage.

In 2007, Tom Coughlin, New York Giants head coach, asked Gadson to meet with the then-struggling team. Gadson talked to the players about service, teamwork, duty, perseverance and adversity and has mentored the Giants since then. In addition, Col Gadson has delivered his inspirational message and leadership counsel to numerous sports teams, corporate and non-profit organizations and government agencies.

His awards include the Distinguished Service Medal; 2 Legion of Merits; 3 Bronze Stars; a Purple Heart; the Meritorious Service Medal and the Army Commendation Medal. He is a graduate of Command and General Staff College at Fort Leavenworth, Kansas; and holds masters degrees in Information Systems from Webster University; and in Policy Management from Georgetown University. He holds an honorary Doctorate of Laws from Webster University. 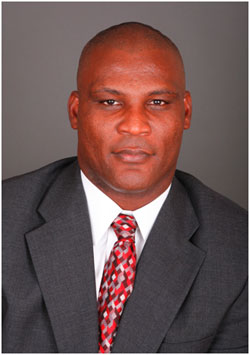 After being severely wounded on Father’s Day, June 19, 2005, when an improvised explosive device detonated near his HMMWV on a Baghdad highway, United States Army Pfc.Timothy J. Hines, Jr. had three things on his mind; his pregnant wife, Katy; his 2-year-old daughter, Lily; and the expected baby. “A buddy who stayed with him while they waited for help said all he talked about was Lily, Katy and the coming baby,” said Kathi Wessel, Hines’ mother-in-law. “He’s the kind of young man any mother would want her daughter to marry.”

Thus began an experience for Katy Hines that is all too familiar for our country’s military families. Katy flew to Landstuhl, Germany to be with Tim and they eventually returned to Walter Reed Military Medical Center. After the bombing, Tim Hines’ right leg was amputated; he underwent 30 hours of surgery and received 300 pints of blood. No one expected him to survive, but time and time again, surgery after surgery he pulled through and made it back to the United States. Tim was a fighter and he proved that to everyone he met. Throughout the ordeal, Katy stayed by Tim’s side. Her devotion to Tim was so complete that she passed on an opportunity to meet President George W. Bush who had heard Tim and Katy’s story.

Pfc.Timothy J. Hines, Jr. died July 14 at the age of 21 from the injuries he sustained in the Iraq War bombing. Posthumously Pfc. Hines was awarded the Bronze Star Medal for Meritorious Service, the Purple Heart Medal and the Army Good Conduct Medal. At the time of his passing, Katy was quoted as saying; “Tim fought hard for his country, family and ultimately, his life. He was a loyal husband and father and an incredible American. Noah Timothy James Hines, Tim’s son was born August 16, 2005.

After she lost Tim, Katy had three objectives; to grieve, honor Tim and move forward with her life.

In 2007, Katy and her family established the “Pfc. Timothy Hines Jr. Memorial Scholarship Fund” as a way to leave a lasting memory of Tim and his sacrifices as well as the sacrifices of all our wounded and fallen soldiers. The primary fund raising event is Hines Hoops for Heroes, an annual March Madness basketball pool. Tim loved all sports but basketball was by far his favorite. He participated in a March Madness pool every year and it seemed a fitting way to honor him. The fund presents a college scholarship each year to a high school senior at Cincinnati Christian School. Tim & Katy met at and graduated from CCS. It also supports “Impact a Hero” and the USO of Central Ohio.

In 2006, Pfc. Hines was honored by “Hero’s Ride”, an annual gathering in Fairfield, Ohio of motorcycle enthusiasts. All proceeds from the ride also benefit “Impact a Hero” dedicated to providing continuous emotional, career and financial support to American military personnel severely injured or disabled due to serving in the War on Terror. Katy along with her Dad, Jim Wessel participates in the ride every year. Looking ahead to 2015, Katy plans to ride her own motorcycle in the “Hero’s Ride” for the first time. The 2014 event attracted over 600 riders.

Annually, Lily and Noah Hines along with Katy attend the Snowball Express. Since 2006, the mission of Snowball Express has been to provide hope and new happy memories to the children of military fallen heroes who have died while on active duty since 9/11. The four day experience is filled with fun activities, like sporting events, dances, amusement parks and more however their main goal is to honor the sacrifice the families of the fallen have made, and make sure that children who lost a parent can connect with other children who are experiencing the same. Children between the ages of 5 and 18 are eligible to attend the Snowball Express but 12 year old Lily Hines is already planning ahead. She recently told her grandmother she wanted to be a Snowball Express volunteer when she was too old to participate.

Tim Hines is a presence in Katy’s life. He is talked about frequently with loving memories and humor at family gatherings. Tim was full of life and love. He brought a smile to everyone he met and now Lily and Noah continue to bring those smiles and that joy to the entire family. Today, with the help of her husband Joe Guggenbiller, a Fairfield firefighter and paramedic, and the addition of Emma, age 6 and 1 year old Aiden to their family, Katy has achieved a balance in her life. A balance that honors Tim and keeps his memory alive for her, Lily and Noah but has allowed her to move forward and live her life which is what Tim would have wanted.

In choosing Katy Hines as one of our 2014 USO Tribute Cincinnati Honorees, we are not only honoring United States Army Pfc. Timothy J. Hines, Jr. but we are also honoring all the military families who have given a loved one in the defense of our country and our freedom. 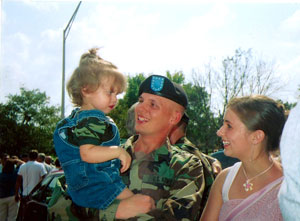