Marine Sgt. Christopher (Chris) Santiago enlisted in the Marine Corps in May 2003 and spent time in Afghanistan and Iraq while serving with the 2nd Battalion, 8th Marine, 2nd Division.

Santiago was injured Sept. 16, 2006, after stepping on an improvised explosive device (IED) as he returned from performing a vehicle extraction for the squad on foot patrol. The IED was outside the gate to the area where the troops were staying, and the resulting explosion claimed both of Santiago’s legs and his left forearm.

Santiago’s injuries were treated in Iraq, and he was later airlifted to Landstuhl, Germany. When sufficiently stabilized for travel, he was flown to Bethesda, Md., where he received further treatment and rehabilitation at the National Naval Medical Center.

During his rehabilitation, Santiago far exceeded doctor’s expectations, standing and walking with the use of prosthetics long before it would be expected.

Santiago, now 26 years old, resides in Bowie, Md., with his wife, Becky, and 1-year-old son Chris and 4-year-old stepson Robert. He is currently working as a budget officer and financial official at the Secretary of the Navy’s Council of Review Boards.

Prior to his deployment, Santiago attended Marshall University in Huntington, W. Va., on a full academic scholarship. While his injuries delayed his return to school, he is now pursuing a bachelor’s degree in global business and public policy, with a minor in finance from the University of Maryland College. In the future, Santiago hopes to pursue a career in the financial industry.

Chris, his wife Becky and their two boys Robert(6) and Christopher (3) recently moved to Queen Anne MD. Homes For Our Troops provided a specially adapted home for the Santiago family. Chris is continuing his education towards a B.S. in Finance with an accounting minor and plans to work towards an M.S. in accounting. In addition to work and school he is on the board of 100 Entrepreneurs Foundation (www.100entproject.org) which puts on classes and presentations for wounded vets and caregivers at Walter Reed and Ft. Belvoir. Chris is actively involved in managing the foundation. 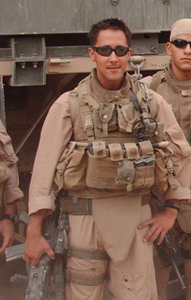 Brandon Edwards enlisted in the military in April 2006. He attended basic training and technical school at Lackland Air Force Base in Texas, where he graduated in September 2006. Senior Airman Edwards was stationed in Minot, N.D., through December 2009 for his first tour of duty.

Edwards recently completed his first deployment to Afghanistan. While serving there, he acted as a spotter for fellow honoree Staff Sergeant Benjamin George Seekell, who was injured after stepping on a land mine.

Edwards remains on active duty and is stationed at Charleston Air Force Base in South Carolina. He attended Gibault High School in his home state of Illinois.

Brandon will commence terminal leave, completing his years of service in March of 2014. He completed his Associates Degree in Criminal Justice. Brandon received the Air Achievement Medal with Valor. He lives in Charleston S.C.; Combat Infantry Badge; Expert Infantryman Badge; British Foreign Jump Wings; and he was honored as a Distinguished Member of the 505th Regiment. 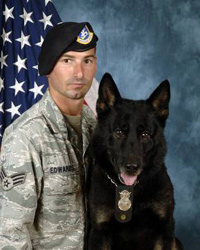 Spc. Adam J. Bates, a native of Fairfield, Ohio, enlisted in the Army in January 2009 in the Airborne Infantry, aspiring to become an Army Ranger. After seven months of infantry basic training, Airborne School and the Ranger Indoctrination Program (a grueling four-week school worthy of the acronym RIP) at Fort Benning, Ga., he was assigned to the 1st Ranger Battalion, 75th Ranger Regiment, at Hunter Army Airfield in Savannah, Ga.

Shortly after joining his elite unit, Bates deployed to Afghanistan. On Nov. 26, 2009, while conducting combat operations on foot, Bates was severely injured by an improvised explosive device, or IED.

Bates is currently continuing his recovery in the Washington, D.C., area and plans to attend college and pursue employment opportunities once he is no longer on active duty. He attended Fairfield High School.

Adam is currently attending school at Montgomery College in Maryland. 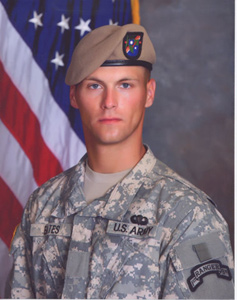 Following his graduation from high school in his hometown of Charlestown, R.I., Benjamin George Seekell enlisted in the Air Force and became a staff sergeant in 2004.

On May 8, 2011, Seekell and Charlie were leading a group on a routine security patrol outside the wire at Bagram Airfield, Afghanistan. About 1,000 meters from base, one member of Seekell’s team, who was patrolling behind him, stepped on a land mine and was injured. This incident caused Seekell, Charlie and two others to become separated from the rest of the group. Seekell and the other two airmen headed back to base in a different direction.

Approximately 15 to 20 feet from the base, he and his group encountered a ravine. Seekell provided cover while the other two men moved across the ravine. After successfully reaching the other side, they then provided cover for Seekell and Charlie. As he and Charlie navigated the ravine, the ground exploded. It was another land mine. Seekell went airborne, landing on his chest. It was then that he noticed his left foot was missing. One of the men in his group extended a hand and pulled both Seekell and Charlie from the ravine. Seekell said he remembers asking, “How bad is it?” Deciding that losing his foot was better than bleeding to death, he took out his tourniquet and asked that it be applied.

Charlie suffered shrapnel wounds to his hind legs, his tail and blew out both his eardrums. Both are recovering and looking forward to returning to active duty. Seekell and Charlie were awarded the Purple Heart for wounds received in action.

Ben and his wife, Meagan, have three young school age soccer players, Kayla(8),Matthew(7) , Caiden(5) and a four month old baby boy, Miles. Ben continues to work with and train handlers and dogs for military service at Seymour Air Force base. Meagan assists military wives as a Key Spouse for the squadron, planning events and offering support for wives whose husbands are deployed. The Seekells are looking forward to this December when Ben’s dog, Charlie, will officially retire and become a member of the family! 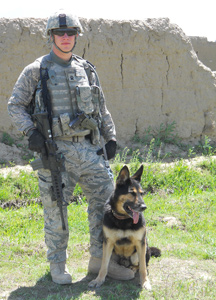