SFC Mark A. Wanner is a hero by anyone’s definition of the word, but maybe most of all in the eyes of fellow 2010 honoree SFC Sean Clifton. Their lives became forever intertwined on May 31, 2009, while Warner was assigned to Company B, 2nd Battalion, 19th Special Forces Group.

On that fateful day, Wanner accompanied his team as senior medical sergeant on a mission through a village in eastern Afghanistan, where a known Taliban leader would be meeting with Taliban fighters. During the mission, SFC Sean Clifton was severely wounded by four rounds of gunfire. Wanner assisted the team medic in dragging Clifton out of the gunfire to a safer side of the building, only to receive fire through a window 15 feet away. Wanner and the medic threw a fragmentation grenade into the window, giving them enough time to race Clifton to a vehicle for evacuation.

Wanner continued to provide life-saving care to Clifton as they headed toward the medical evacuation site, and he didn’t leave Clifton’s side until three days later when Clifton was transported to a hospital in Germany. Wanner is highly decorated and his awards include the Silver Star, the Bronze Star (two times) and the Legion of Merit.

Wanner’s actions that day were a culmination of the nearly 20 years he has devoted to military service. During his career he has held a variety of occupational specialties, including vehicle mechanic, carpentry and masonry specialist, and combat engineer.

Wanner enlisted in the 816th Engineers, Hettinger, N.D., as a heavy-wheeled diesel mechanic from 1990 to 1996. He retrained as a combat engineer before being transferred to 142nd Engineers at Fargo, N.D., and reclassed to carpentry/masonry specialist from 1996 to 2000. During this time, Wanner constructed a clinic in Bolivia and a section of the U.S.-Mexico border fence in California. He also worked on construction at Camp Humphreys, Korea, and on numerous state projects. In addition, he completed a deployment to Kosovo as part of Task Force Falcon-KFOR.

Wanner’s most recent assignment was with the 216th Engineers at Portsmouth, Ohio, as a construction squad leader from 2000 to 2003. In 2003, he volunteered for the Airborne School and Special Forces Qualification Course. At present he is assigned to ODA 9224, Company B, 2nd Battalion 19th Special Forces Group (Airborne).

While not saving lives and serving our country, Wanner enjoys spending time with his wife and two sons.

Mark and Martha now have three wonderful sons. Austin is 9, Taylor,7 and Aiden, 1 and a half. Mark continues to work as a general contractor, building homes and has started a taxidermy business that specializes in big game animals. He also helps coach wrestling for Bowman High School. As a father of three boys Mark keeps busy as a Den Leader for Cub Scouts. 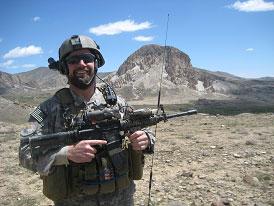 While serving his country in Afghanistan in 2009 as a Special Forces Intelligence Sergeant, SFC Sean Clifton went on what he thought would be a routine raid of a Taliban compound. However, May 31, 2009, turned out to be a day he would fight for his life, and win, with the help of two other brave soldiers.

Five days earlier, Clifton’s team had received intelligence that a known Taliban leader would be meeting with about half a dozen Taliban fighters in a village in eastern Afghanistan. Upon clearing a doorway of the suspected terrorists’ compound, he was shot multiple times by Taliban fighters.

Two of the rounds were critical: one hit his left arm, shattering his wrist and rendering his left arm useless. Another round hit just under his body armor, entering his left waistline, ripping through his abdomen and injuring the small intestine, large intestine, ureter, bladder, sciatic nerve, and causing major vascular damage.

Realizing the severity of his wounds, Clifton headed out the doorway and found a team medic, SFC Matt Sheaffer. The team’s senior medic SFC Mark Wanner (and Clifton’s fellow honoree) ran over to assist. Heroic actions by Sheaffer and Wanner, including using a grenade to buy the time needed to get to a vehicle, kept Clifton alive on the battlefield and during his evacuation to a medical facility.

After returning to the United States, Clifton spent three months at Walter Reed Army Medical Center in Washington, D.C. With his wife and his two young sons by his side, he underwent more than 20 medical procedures and his recovery is ongoing.

Clifton is currently attached to the FBI Joint Terrorism Task Force (JTTF) as an Intelligence Analyst. Clifton has served in the military for more than 16 years, including two tours of combat: one to Iraq and the other to Afghanistan.

“Since being a part of the USO Tribute Cincinnati in 2010, our family has had many updates and successes. Most notably, a miracle occurred in May of 2011… My wife gave birth to our 3rd son, Scott. Scott is truly a miracle, as he was born after my combat injuries. In May of 2009, I almost lost my life on the battlefield in Afghanistan… In May of 2011, we have created life and brought another “good guy” into this world! Additionally, in the Spring of 2011 I underwent additional surgical procedures to repair combat wounds to my abdomen and arm. Upon recovery from those surgeries, I have been more active than ever. I began an intense physical therapy/recovery regimen in the Summer of 2011 and have not looked back. I participated in my first Triathlon in the Summer of 2012, and am now a member of several Wounded Warrior athletic recovery teams. I have also become very active in CrossFit and other multi-sport activities. I recently participated in the “Valor Games” in August 2013 and won a Silver medal in cycling and a Gold medal in power-lifting. The last most notable update is that I am now working full time for the Department of Justice as an Analyst. The DoJ allowed me to intern in a “Wounded Warrior Internship Program” in which I was successfully hired after the internship completed. I started working full time in May of 2012 in our Columbus office, with our headquarters office located in Cincinnati. We continue to count our blessings and are sincerely appreciative of all of the support that USO Cincinnati has provided.” 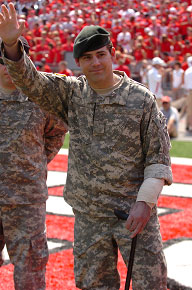 Rick has been through 4 surgeries to reconstruct his skull and developed a seizure disorder. It has been almost 5 years since his last surgery and thanks to anti-seizure medicine; he is over 3 years seizure free. Despite being found medically unfit to stay in the military, he requested to stay and reenlisted in August of 2010 to reclassify into being a 35F, All Source Intelligence Analyst. Since being a part of the Army GEOINT Battalion’s (AGB) All Source section he has received a Certificate of Achievement for his performance during the 2012 Department of the Army Approved Ground Warfighter GEOINT Conference from 5-7 June. He has also received the Army Achievement Medals for performance and leadership capabilities during the AGB’s March 2012 FTX. During the AGB’s June 2012 FTX competition, his team won.

Awards include the Purple Heart, 2 ARCOMs, 2 AAMs, 2 GCM, and the Iraqi Campaign Medal with two campaign stars. Rick completed WLC in November 2011, with top marks earning a spot on the Commandant’s list. His hobbies include spending time with his wife, and going to classically old movie theaters. Rick completed his Associates degree in Criminal Justice from Colorado Technical University online in January 2012 and is working towards his Bachelors in Criminal Justice with a concentration in Homeland Security and Emergency Management. He will graduate in Nov. 2013. He has been married to his wife, Barbara Zimmerman for over 4 years now. Rick’s short term goals are to complete his degree and continue his career of leading and training Soldiers. Long term goals are to stay in the military as a career with a goal of joining Officer Candidate School and obtaining an Army commission.

Corporal Jeremy L Stengel was born on September 18, 1985 in West Allis, WI. After watching the events of 9/11 he was strongly moved to join the infantry of the Marine Corps. He joined the Marine Corps on June 20, 2003 in the delayed entry program. Corporal Stengel graduated from Waterford High School on June 12, 2004 and attended Recruit Training on June 13, 2004.

On Sept 10, 2004, Private Stengel graduated from MCRD San Diego, Lima Company, Platoon 3097. Following completion of Recruit Training, he went back to California to continue his training at the School of Infantry (West), and completed basic rifleman and machine gun training.

After his unit’s work up, Lance Corporal Stengel deployed to Afghanistan in June 05 with Weapons Company. On January 06 he returned home after a successful tour in Afghanistan. Coming off post deployment leave he was then assigned to Weapons Company Mobile Assault Platoon 1-MAP1.

Jeremy Stengle is married to the woman he had just started dating when he came to the USO Tribute Cincinnati when he was honored in 2010. Her name is Georgia Lynn Parsons and they were married on June 15th 2013 at the War Memorial in Milwaukee, WI. They are waiting a few years before starting a family since Georgia just graduated from Columbia/St. Mary’s of Nursing in May and started her nursing career. Jeremy was medically retired from the United States Marine Corps Aug 30, 2011 and started his first semester at Marquette University the very next day. He is focusing on college and doing local Wisconsin events to help spread the message around his state. He is currently attending Marquette University and has completed about 20-30 credits since he started there Aug 31, 2011. Jeremy is currently taking this semester off to decide a career path. He has been involved with local Wisconsin veterans’ events since returning home on Aug 30, 2011. Jeremy has represented the wounded warriors at numerous Packer and Brewer games. When the weather is good he participates in golf outings for Wisconsin Veteran organizations and Homes For Our Troops. Since he was last in Cincinnati he had a home built by Homes For Our Troops which was completed May 2011. He was given the Medal of Merit by the American Legion when he went home for the first time after being injured back in December 2007. Before being honored in Cincinnati he was presented with the 2010 USO-Metro Special Salute representing the United States Marine Corps. He participated in the 2012 RIC summer Military Sports Camp and was presented with the Outstanding Achievement Award and took a Bronze Medal in the indoor rowing category at the Midwest 2012 Valor Games. He got to work out with JJ Watt after winning a challenge at the gym he and Georgia belong to. Just this past September he and Georgia did the Tough Mudder in Oshkosh, WI. It took Jeremy a little over 7 hrs. but he completed the rigorous 12 mile course. 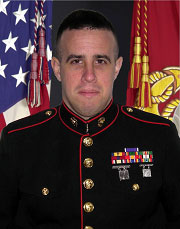